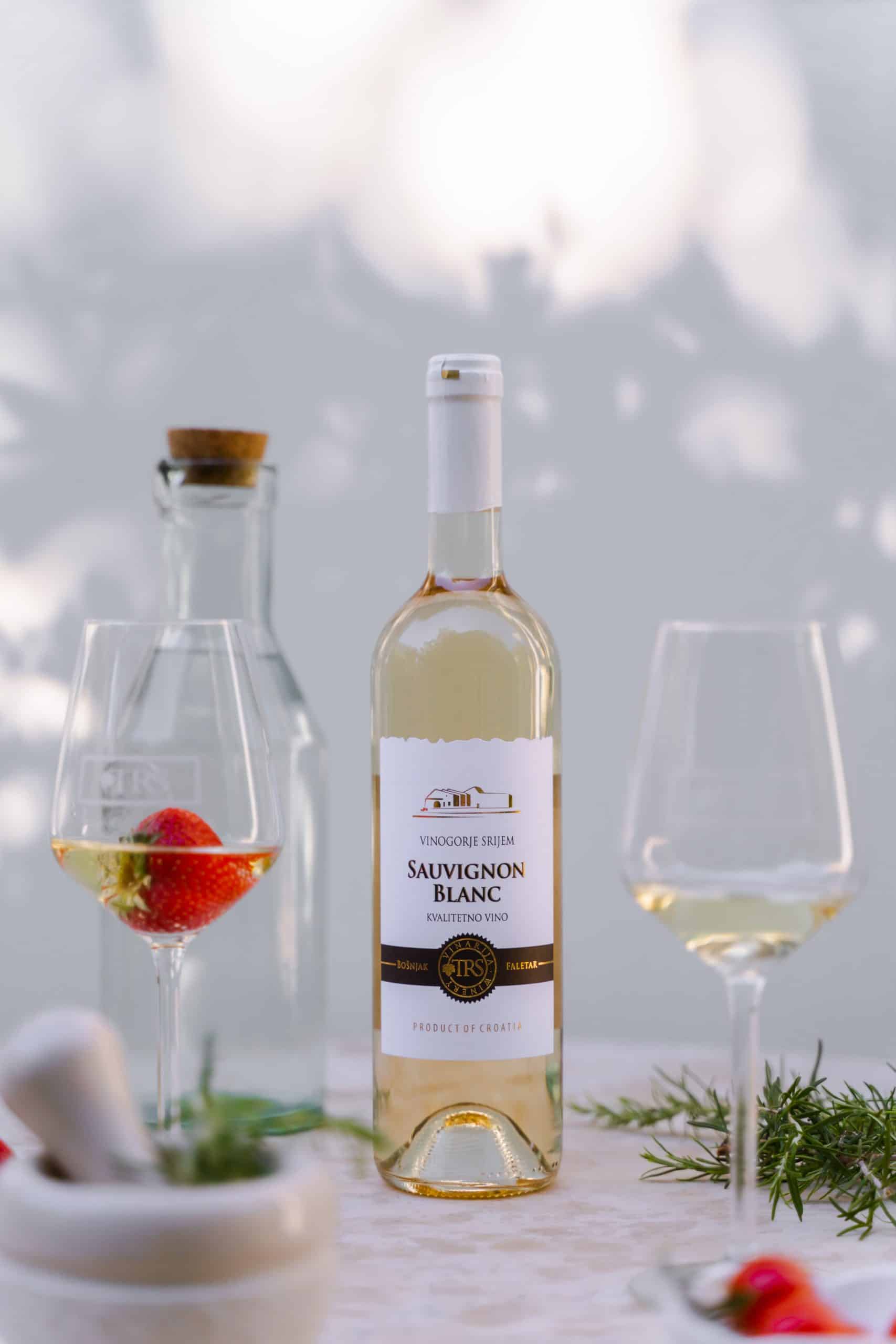 Our mission is to provide our customers with the superior quality and value of wine, along with an unforgettable experience of warmth, friendship and fun.

Guided by tradition, experience and knowledge and constant investment in quality, equipment and togetherness, we are ready to conquer new markets, keep satisfied old ones and keep up always ahead of others in the form of innovations, new products and ideas.

The best stories are personal stories. Stories of love or personal need are those stories that add value, give that which makes a difference. This is exactly the story of the winery Trs.

Two friends – Zlatko and Marijo, dissatisfied with the placement of raw materials and dependence on others as producers of grapes, decided to produce wine on their own, from their grapes. With little experience in wine production, both of them, driven by the desire to give value to their fruit, embarked on a joint entrepreneurial adventure, without even dreaming where it would take them seventeen years later.

In the very beginning, they each produced wine for themselves in the Bosnjak family home. The initial capacity was 30,000 liters of wine.

Realizing that there were many benefits to unity, they joined forces in 2003.

At that time, a family house and a larger associated production cellar were built, where the two friends decided to stay together, open an agricultural cooperative and enter into joint production.

In the year 2007 they founded the winery Trs and moved the entire production, increasing the capacity to 80,000 liters. At that time they were cultivating 29 hectares of their own plantations.

They divided up the tasks according to their preferences. So Marijo takes care of the vineyards, and Zlatko of the wine. The two friends stayed together and opened an agricultural cooperative.

At that time the cooperative consisted of 4 members, Marijo and Zlatko with their wives, who were also the founders.

After some time the cellar became too small for them, so in 2009 they decided to buy a new cellar location. Wanting to avoid a high credit risk, they enter into cooperation with Mr. Ilija Tokic from Sesvete as an investor and strategic partner. This gives them a much wider circle of acquaintances and markets.

Winery Trs is a story of friendship and success from the very beginning, and only then a successful entrepreneurial story.

Step by step, together, like three friends, like three families they build a company, without sudden jumps, and especially without crashes.

With the accession to the EU, we have opened many opportunities to apply for EU funds. With the help of EU funds, the Trs winery now has a new cellar, an increase in capacity and a modernization of production. All with the aim of maintaining the quality of the wine in view of the large capacity expansion.

Winery Trs is more than an entrepreneurial story. It is the story of the success of a cooperative, of the idea of work through togetherness, cooperation, less investment of joint production and, finally, of entering the market together and realizing one’s desires.

The story is about friends, about families, about love for the land, the fertile soil we are rich in, about the fruits the land can offer and the top wine as the final result that the Trs Winery wants to offer to every lover of good wine and Croatian product.

STORY OF COOPERATION SINCE 1872.

The first mention of the area of the present Joseph Jurass Strossmayer Street dates from the time of the Ottomans, when the area was called Chaira. The term comes from the Turkish word tea tree, which means meadow. This shows that there was a meadow in the Chaire area at that time, and there is no road yet in the 1834 street directory. From the same year, the Luknar books for Šimićeva street (today’s Radićeva) list several families at the beginning of Čaira, then part of Šimićeva street.

The cultivation of vines in the Ilok area dates back to the 3rd century and the Roman Emperor Probus, but it is only with the arrival of the Italian noble family Odescalchi that the planting and care of vines and wine production is modernized. In the second half of the 19th century, many Ilok wines won awards at wine fairs throughout Europe. Because of the competition and the better placement of Ilok wine in European markets, there was a growing need to join forces with local winegrowers and winemakers. The first such association was formed January 30, 1872. under the name “First the Sriem Vineyard Joint Stock Company” after  confirmation by the Royal Croatian-Slavonian-Dalmatian Land Government – Department of the Interior. The founding members were Ivan Tirol, Mija Ferenčević, Marijan Karlović, Mita Kirianović, Ignatz Wortman, Josip Kindl, Julius Mozer and Marko Meštrović, while the president of the Society became Paja Arsenic. The statutes of the society, printed in 1882, state that the aim of the society is “to perfect Srijem wine according to the latest system and to sell the same as the most profitable, and it will be sold under the name Sriem Wine “. Concern for the storage and sale of the wine prompted the cooperative to construct a building with a cooperative cellar in Chaira. There is no preserved data about the construction year of the cooperative cellar, but it is known that it was very deep and the capacity of the barrels of 20 wagons, and the space above the cellar had an area of 834 m2. It is known that in the 60s of the 20th century the cellar with built-in cisterns had a capacity of about 44 wine wagons. Initially, Sriem winemaking joint stock company had a good placement of its wines on the domestic market and the Danube on the European market until the advent of phylloxera disease in the 80s of the 19th century. In this period, due to several factors, the company deteriorates and in the 90s it ceases its activity.

After the Society collapsed, the cellar ceased to operate. Arriving in Ilok from the area of today’s Czech Republic, Stjepan Bernheim founded a brick factory on the site where the cooperative cellar was located. It is not known exactly when it started its operation, but the brick was marked S.B. In the western part of the site in 1906 Bernheim founded a modern steam-powered factory with modern brick-making machines and a tile with a circular “Ring” furnace. The factory ceased operations in 1921, forcing Bernheim to sell the factory property due to losses. It was the last brickyard in the upper town. The factory buildings were soon demolished and the western portion of the property was divided into smaller lots on which houses were built in the following years. Shortly after the brickyard closed, some craftsmen from Ilok and surrounding towns bought machinery for wool production with the intention of establishing a factory. The Ilok branch of “Sreska banka Ruma” was interested in the financing, in which Rudolf Horvatović, a surveyor, member of the bank’s board and later director of the factory, played a major role. It was founded in 1922. “Wool goods factory d.d.” in Ilok with a share capital of 5,000,000 dinars and the building of the former First Sriem Vinaric Joint Stock Society, the so-called “Winery” was bought from Stephen Bernheim, owner of a brick factory. In the ground building, made of solid masonry of hard material, internal changes and extensions were made, and then began to assemble the machines that were brought. Rooms were formed to house wool, spinning, weaving, laundry and machine rooms. According to data from 1923. it employed 24 workers in combing, blending and spinning wool, weaving, washing, painting, finishing and stacking goods and in the machine room. In 1924. business problems arose because the organization was poor and the technology could not keep up with the market. Moreover, bank lending was called into question by 1925. so Wool goods factory was put into liquidation. Finished goods, raw materials for production and machinery were auctioned. From the estimated value of 2,000,000 dinars, the factory was sold for 265,000 dinars, and the building was purchased by the Ilok municipality. From business reports of “Croatian wine cooperatives in Ilok” from 1943. it is possible to find out the size of the cellar in Chaira. The said cooperative planned to buy from the Municipality of Ilok the cellar of the former cooperative with a volume of about 5,000 hl, which could be further expanded, but the end of the World War II and the changes in the political situation stopped further plans regarding the cellar in Chaira.