Wine has become a symbol of culture and life  throughout the world. It has its origins in pre-agrarian societies, in biblical times and in modern tourist destinations. The history of wine traces the evolution of the beverage throughout human civilization, from an important source source of nutrition to a vital nutritional supplement and way of life.

In 2011  National Geographic reports that the oldest known winery in the world was discovered in Armenia. Built in a prehistoric cemetery more than 6,000 years ago, the people who inhabited the area may have used wine in their grave rituals. Archaeologists discovered a wine press for pressing grapes, fermentation and storage containers, jars, skins and seeds. Patrick McGovern, a biomolecular archeologist at the University of Pennsylvania, noticed that the presence of the winery is “important and unique because it indicates a large production of wine,” implying that grapes were domesticated as early as 6,000 years ago 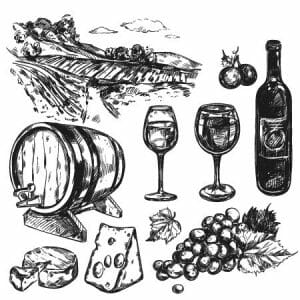 TRS winery hasn’t been around for 6,000 years, but we have been around for 15 years, united as two families in a love – that of our land and the wines that come as the end result of that love.

Perhaps humans are evolutionarily destined to turn to the production of alcohol. Numerous scientists have theorized that our ancient ancestors were attracted to the strong smell of rotting fruit, which comes from microscopic yeasts that eat the sugars in the fruit, leaving behind carbon dioxide and ethanol. This fermentation process has been around since fruit first appeared on the planet, some 120 million years ago, and may have been the best thing to happen to the human race. Researchers believe that the ethanol produced by fermentation not only tasted good to our ancestors, but also provided them with vital calories and boosted their immune systems.

Did you know that 10 percent of the enzymes in the human liver are produced “by being dedicated solely to converting alcohol into energy.”? One way or another, alcohol has been an important part of human evolution and civilization, and wine is an integral part of that

history. The first tasting of wine, according to National Geograph, may have occurred as early as the Paleolithic era.

The oldest (intentionally) fermented beverage ever discovered is a 9,000-year-old rice and honey wine. Sixteen pottery shards in a village in China showed that it was a liquid that was “mixed fermented beverage of rice, honey and fruit.” Around the same time, people in Central Europe had just begun experimenting with common grapes, and there is evidence that these people may have found the formula for deliberate fermentation of such fruits about 7,400  years ago. Paleolithic people (and subsequent periods) had no idea that ethanol drink from rotting fruit (and then intentionally fermented grapes) had any health benefits, but those who drank it usually lived longer (and better) than those who did not. Over time, people who drank wine passed on the taste and preference for wine to their descendants.

Wine also played an important role in Ancient Egypt. Tutankhamon, perhaps the most famous of all the pharaohs of the Kingdom of Egypt, was buried with jars of wine to enjoy the afterlife, and chemical analysis of the jars showed that the young king had a taste for red wine.

Black or white, the TRS winery will offer something for every palate.